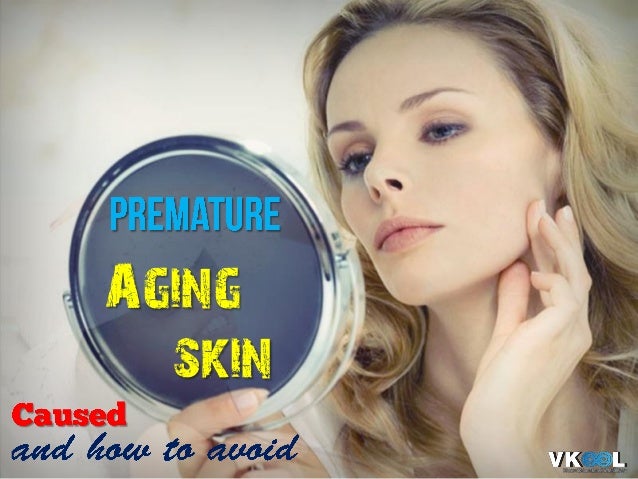 Premature Aging Skin Causes And How To Avoid

Here are 2 types and 3 causes of premature aging skin, for 2 additional causes and tips on how to avoid premature aging skin, visit the link: http://vkool.com/premature-aging-skin/
I. 2 Types Of Premature Aging Skin
1. Intrinsic Aging
This type of premature aging skin often appears in people’s mid-20s that features with the reduction of collagen production and elastin. Dead skin cells cannot shed as fast as normal. The new cells, in return, reduce slightly. Oftentimes, the signs of intrinsic aging are not actually visible for years. Generally speaking, intrinsic aging comes with some common symptoms, such as fine wrinkles, transparent and thin skin, dry skin, hair loss, unwanted hair, gray or white hair, sagging skin, loss of firmness on hands and neck, and loss of fat. In fact, in terms of science, the speed of natural aging process depends on the genes.
2. Extrinsic Aging
There are a number of extrinsic and external factors affect the speed of aging skin in human beings. The main factor is sun exposure, which is the major cause of premature aging skin. Sleep positions, smoking, repetitive facial expressions and gravity are among other causes.
II. 3 Causes Of Premature Aging Skin
1. The Sun
It is shown that just with a few minutes of sun exposure per day through many years could harm the skin, causing some signs, like age spots, leathery and rough skin, freckles, loose skin, skin cancer, and a blotchy complexion.
The type of aging skin resulted by sun exposure is called “photoaging” by the doctors and dermatologists. The level of this condition depends on the history of sun exposure intensity and skin color. In addition, sun exposure also damages the elastin, which plays a big role in maintaining the elasticity of the human skin.
2. Repetitive Facial Expressions
Repetitive facial expressions such as sad or happy expression appeared via the eyes or smile, could result in signs of premature aging skin. In such case, the skin does not look tone and the person will appear older than their real age.
When a person uses one of facial muscles, a groove will form beneath their skin surface, thereby causing lines as a part of certain facial expression. The grooves over time become etched on the face, forming fine lines and wrinkles.
3. Gravity
This is an almost inevitable one among many causes of premature aging skin acknowledged. In fact, gravity could constantly pull on the human body. The face changes due to gravity are more visible when people age. In the age of 50 or more, the human skin’s elasticity declines, making the effect of gravity evident. Besides, gravity might cause the eyelids to fall, the tip of nose to drop, the ears to elongate, the jowls to build, the upper lip to disappear, and the lower lip to be more pronounced.

Premature Aging Skin Causes And How To Avoid