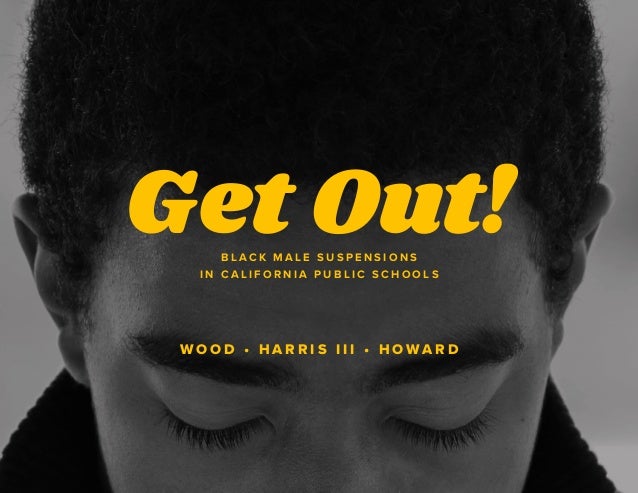 This report is a joint publication of the Black Minds Project (an initiative of the Community College Equity Assessment Lab (CCEAL) at San Diego State University (SDSU) and the Black Male Institute at the University of California, Los-Angeles (UCLA). In this report, we present analyses of publicly available statewide data on the suspension of Black males in California’s public schools.

The statewide suspension rate for Black males is 3.6 times
greater than that of the statewide rate for all students. Specifically, while 3.6% of all students were suspended in 2016-2017, the
suspension rate for Black boys and young men was 12.8%.
• Since 2011-2012, the suspension rates of Black males in California
has declined from 17.8% to 12.8%.
• The highest suspension disparity by grade level occurs in early
childhood education (Grades K through 3) where Black boys are
5.6 times more likely to be suspended than the state average.
• Black male students who are classified as “foster youth” are
suspended at noticeably high rates, at 27.4%. Across all analyses,
Black males who were foster youth in seventh and eighth grade
represented the subgroup that had the highest percentage of
Black male suspensions, at 41.0%.
• The highest total suspensions occurred in large urban counties,
such as Los Angeles County, Sacramento County, San
Bernardino County, Riverside County, and Contra Costa County.
In fact, these five counties alone account for 61% of Black
male suspensions.
• The highest suspension rates for Black males occur in rural
counties that have smaller Black male enrollments. In 2016-2017,Glenn County led the state in Black male suspensions at 42.9%.
• Other Counties with high suspension rates included Amador
County, Colusa County, Del Norte County, and Tehama County.
San Joaquin county has especially high suspension patterns.
In the past 5 years, they have reported suspension rates
at 20% or above. Four counties have reported similarly high
suspension patterns across the past 4 of 5 years, they include:
Modoc County, Butte County, Merced County, and Yuba County.
• A number of districts have large numbers of Black boys
and young men who were suspended at least once. Some
of these districts included Sacramento City Unified (n = 887),
Los Angeles Unified (n = 849), Elk Grove Unified (n = 745), Fresno
Unified (n = 729) and Oakland Unified (n = 711).
• There are 10 school districts in the state with suspension rates
above 30%. Of these, the highest suspension rates are reported
at Bayshore Elementary (San Mateo County, at 50%), Oroville
Union High (Butte County, at 45.2%), and the California School for
the Deaf-Fremont (Alameda County, at 43.8%).
• There are 88 school districts in the state of California that have
suspension rates for Black males that are below the state
average. These schools vary in size, urbanicity, and region.